Zebras can be hunted in all of the safari areas to which ASH Adventures offers hunting safaris. 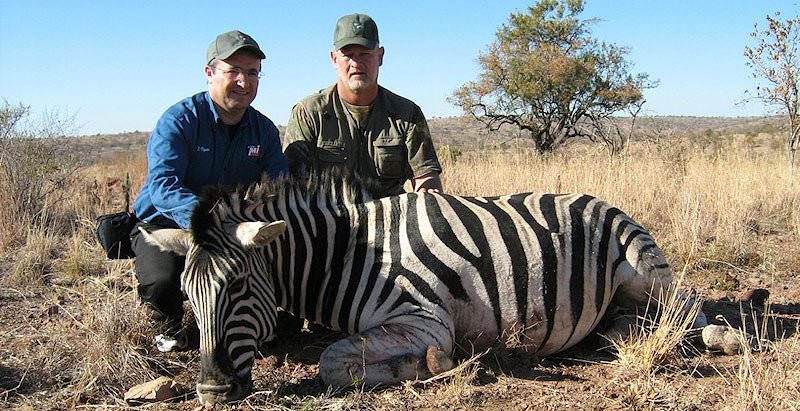 The Burchell's zebra is distinguished from the other zebra species by several pattern features. First and foremost are the shadow stripes, which occur within the broad white stripes found on the hindquarters; he lacks the grid-iron pattern and the dewlap, which is typical on the other species. Sex determination can be very difficult; males will generally be slightly larger and have more developed necks, but more than one professional hunter has shot a stallion that instantly became a mare once downed. Glass carefully when hunting zebra; if alerted, the stallion will most often trail the herd as they withdraw - this may be your best and only indication.

The Burchell's favors the open woodlands and grassy savanna; he avoids the thick bushveld and the desert if possible. Always found where water is abundant, he drinks regularly and cannot take advantage of even the most lush grazing if water is not available. The zebra forms small herds, usually 8 to 10 in number, consisting of a stallion, several mares and their foals. Surplus males are ejected from the herd and form bachelor herds.

Their main enemy is the lion and they will actively defend the herd, kicking violently and ganging up on the attacker. When hunting zebra, sex is often not specified on the permits, as sex determination is difficult. As already mentioned, in flight, the herd will be led away by one of the mares, with the stallion as rear guard; he will often stop and look back - there is your shot. When approaching water, the stallion will most often be in the lead, and when grazing, he will usually stay on the outskirts of the herd. These habits may be useful when hunting zebra. Good glassing may be essential in trophy assessment. If it is the flat skin you are after, be advised that the old stallions will most likely be battle-scarred and worn. Look for a younger male or a mare if a nice clear hide is what you seek. Hunting zebra is best in the early morning or late afternoon. Regular drinkers, set up an ambush on trails leading to water holes or pans.

The .270 Win should be considered minimum equipment with the 30 calibers being a better choice. Look to heavy for caliber expanding soft-points when hunting zebra. This is a remarkably tough member of the equine family; shot placement is critical and, if poorly placed, you will be in for a long day and at risk of losing your trophy. There are many stories of hunters who have shot the zebra with their favorite 30 caliber and later wished they had used the old .375 H&H, so do not be afraid of being over-gunned. The high heart/lung shot is the way to go here. As always, sight up the center of the front leg and place your shot between one third and half way into the body. Higher up and further forward through the center of the shoulder blade will net the shoulder/spinal shot and your zebra will drop to the shot. If you are offered the frontal presentation when hunting zebra, place your shot dead center in the chest at the base of the neck.

Countries in Africa where Plains Zebra can be hunted

Hunting Packages that include a plains zebra

A whole week in pursuit of Southern Africa's most sought-after plains game species in the storied bushveld wilderness of the Limpopo province. Trophies include the kudu, blue wildebeest, impala, warthog, and Burchell's (common) zebra.

Our most comprehensive hunting package - three weeks of unadulterated adventure pursuing some of the continent's most striking plains game species. A whopping twelve trophy animals are included, from the stately kudu to the dazzling Burchell's zebra.