A Cape buffalo hunt in South Africa is sure to be a thrilling dangerous game hunting experience. 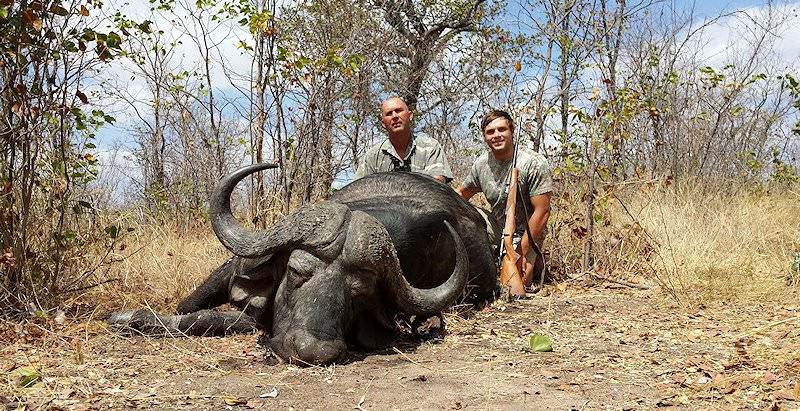 The Cape Buffalo is considered by some to be the most dangerous of all of the Big Five. While he seems docile enough when viewed undisturbed in the herd, when agitated or wounded this bovine can be extremely aggressive, vindictive, and cunning. Found all over southern Africa in herds of various sizes, the buffalo can weigh up to 1800 pounds. He is primarily a grazer but an occasional browser who must drink every day. They favor the thick bushveld during the day, leisurely moving and grazing as they go. At night they tend to herd up to protect the young from their archenemy, the lion. Both sexes carry horns, however, the horns of a bull can be quite spectacular in spread, with a deep curl and a solid boss covering the forehead. Cows lack the boss, but can have a very wide spread; in fact, the world record buffalo on file in the Roland Ward record book is a cow with a spread of some 62 inches.

With a well-placed shot, a rifle of .375 caliber is adequate for the Cape buffalo. However, a shot from the various 40 calibers provides a much more immediate and noticeable effect. With the advent of quality soft-point bullets, many hunters prefer to make their first shot on the buffalo with a soft point to prevent over-penetration and the chance of wounding other members of the herd. Follow-up shots are most often made with solids to take advantage of their superior penetration. Even with a well-placed first shot, once the Cape buffalo is wounded and its adrenalin is flowing, he can be extremely hard to bring down. It has been said that if your first shot on “Inyati”, as the Zulu call him, is a bad one, the next 14 will only serve to further annoy him. Remember, when it comes to shot placement and your selection of rifles and bullets, always trust the judgment of your Professional Hunter.

Countries in Africa where Buffalo can be hunted

Hunting Packages that include a cape buffalo

Pursue the a member of the legendary Big Five - and one of the continent's most dangerous and unpredictable animals - over five unforgettable days in the South Africa bushveld. A hard-bossed Cape buffalo of 37" to 39" is included.

This package couples two awe-inspiring big game trophies for a truly memorable hunt. The hunt is conducted in South Africa's bushveld region and includes a hard-bossed Cape buffalo of 37" to 39" and a sable antelope of 38" to 40".