The stately waterbuck is seldom hunted far from a permanent water source. 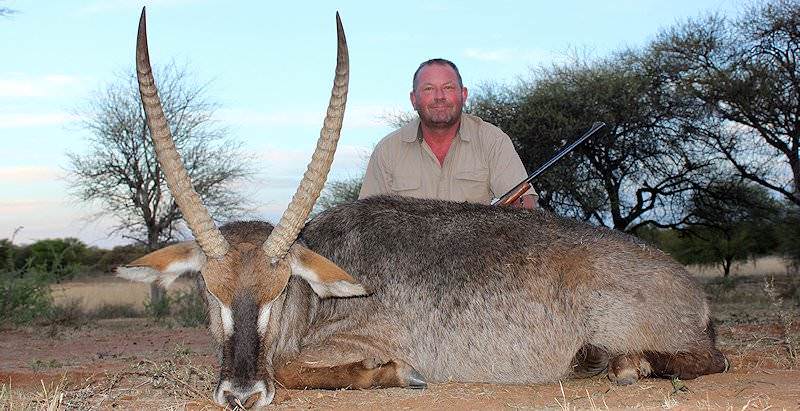 The waterbuck is one of the larger antelope species and, just as his name implies, he is never found very far from water. Normally found in small herds of about 12 animals, this rather large antelope is for the most part a grazer. Similar in appearance to a donkey, only the bulls carry horns; both sexes are characterized by the large white ring on the rump. This stately beast is shunned by predators where game is plentiful due to its tough, stringy, and foul-smelling meat. Sweat glands located all over the body, but concentrated on the flanks provide a rather foul-smelling secretion, which waterproofs the coat but taints the flesh. Territorial by nature, bulls demonstrate their dominance by swinging their necks from side to side. If this fails to deter the intruder, fierce combat can ensue, which usually results in the death of one of the participants.

When hunting waterbuck, good binoculars will be essential, as they can be spotted from quite some distance on the open grasslands and flood plains where they are most often found. While having excellent eyesight and hearing, the waterbuck is not at all hard to approach. The trophy bull can weigh between 550 and 600 pounds, so when hunting waterbuck, ensure that you have enough rifle. For the open country, consider the .270 with 150-grain softpoints the absolute minimum caliber. The 7mm's and 30 calibers with heavy for caliber expanding softpoints are a much better selection. If presented with the broadside while hunting waterbuck, take the coveted high heart/lung shot straight up the foreleg one-third into the body and your “buck” should not go far.

The shoulder mount is the best way to display your trophy, so avoid the neck shot, as it may ruin the cape. If while hunting Waterbuck you are presented with the frontal shot, place it squarely in the middle of the chest, right at the base of the neck. The shoulder or spinal shot should be placed high on the shoulder, above the body's midline and through the shoulder blade; placed correctly, the waterbuck will drop to the shot. Hunting waterbuck can be a real adventure and retrieval can sometimes be as challenging as the stalk itself - you may have to get your feet wet! Good luck and good hunting.

Countries in Africa where Waterbuck can be hunted