Warthog hunting is conducted throughout the wooded savanna areas of South Africa. 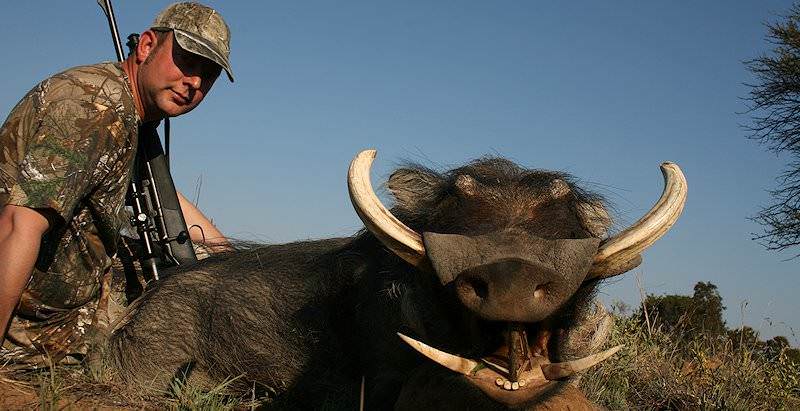 The warthog is a rather common member of the wild pig clan. A distant cousin of the European boar, he is a popular trophy with many safari clients. He favors open ground, grasslands, water holes and pans, and will often be seen in the open woodlands. He especially likes to graze on the newly sprouted grass of a burned out area. The name comes from the wart-like protrusions on his face; two on the female and four on the male. Tusks vary in size, but can become very long on the female and often curve high over the snout. The constant meshing of the upper and lower tusks against each other keep them razor sharp, making the warthog a dangerous adversary.

They live most often in deserted antbear dens which they dig out with their hoofs and clear out with their shovel-like snouts. Piglets enter the den head first while the adults back into the burrow. Not dependent on water, the warthog will drink if it is available. Wallowing in the mud is his favorite pastime. The goal for hunting warthog ranges from the trophy tusks and hide to delicious meat and bait for hunting the leopard. One of the toughest of African game, the adult can weigh in at over 250 pounds. This unique member of the swine family is almost an exclusive grazer; not at all territorial, he wanders wherever he pleases. Found in small family groups called “sounders”, mother and piglets stay together for some time (up to 3 years); the boar joins the group for mating.

When hunting warthog, try your luck near wet, marshy areas, water holes, and pans. Tusks are readily visible; up to one half will be embedded in the skull. While they have two sets of tusks, upper and lower, only the upper tusks are considered for trophy assessment. When hunting warthog, approach slowly from downwind; his eyesight is poor, but his nose and ears work quite well! The 7mm's and 30 calibers will work well with quality 170 or 180-grain soft-point bullets for hunting warthog. On larger, trophy-sized boars, consider the larger calibers for a better effect. Shot placement can be a bit challenging due to the warthog's anatomy and physical appearance. The side-on, high heart shot will be most effective; sight directly up the front leg to about the body midline and squeeze; your hog will not go far. The frontal brain shot is common when hunting warthog; aim right between the eyes and he should drop to the shot. If he is running away, the “Texas hear shot” is called for - place your shot just below the anus. Hunting warthog, whether for trophy or meat, can be challenging as well as exciting - give it a try!

Countries in Africa where warthog can be hunted

Hunting Packages that include a warthog

This 7 day package takes hunters to the iconic bushveld wilderness in the northern reaches of South Africa. In an area packed with all walks of wildlife, you'll hunt for kudu, Burchell's (common) zebra, blue wildebeest and the feisty warthog.