Roan antelope are the second largest of the plains game animals that can be hunted in South Africa. 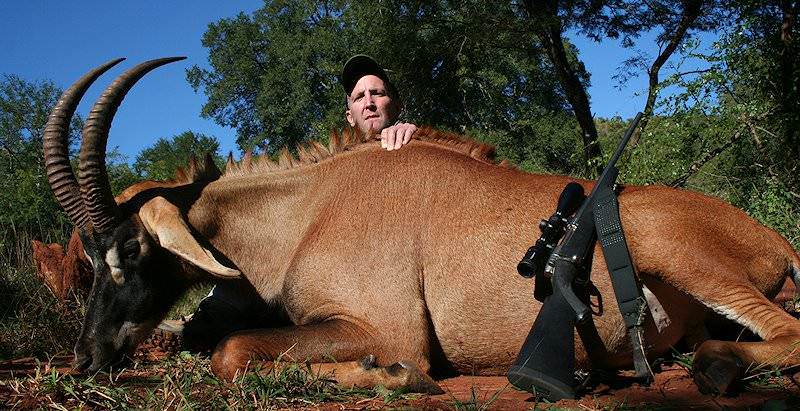 This fairly large antelope is indigenous to the more northern reaches of Southern Africa. However, game ranching has made him available in many place where he was he not previously found. The “roan” in his name refers to his coloring, which shows a strawberry tint when the light is right. The black and white pattern on his face may remind you of the gemsbok and thus his Afrikaans name: bastergemsbok (bastard gemsbok). In reality, this magnificent and regal antelope is more reminiscent of the sable (in this hunter's opinion). This rather large member of the 'horse antelope clan' is surpassed in size only by the eland, and is much more graceful than that lumbering old ox-like creature. Both bulls and cows carry horns, those of the female being more slender and somewhat shorter.

Find the roan in small herds of 5 to 12 individuals. Larger herds, however, are not uncommon. The herd is quite stable, with associations lasting years. Dominant bulls defend the cows from the attentions of any bulls challenging their right to the herd. These challenges are met with high intensity horn clashing, as well as pushing and shoving from a kneeling position. While these contests can appear to be in earnest, serious injury rarely results and the bout terminates when one or the other yields. These are very powerful and dangerous animals and some contests can end in a fatality if neither bull chooses to yield. When hunting roan antelope, the hunter can be subjected to serious injury if he gets too close to the backward sweep of the roan's powerful horns.

Predominantly grazers, the roan prefers savanna with wide, open grassy areas where they tend to scatter and feed. When grass becomes scarce, they revert readily to browsing, a habit not shared by their cousin the sable. They thus seem to stay in better shape than the sable during hard times. Normally water dependent, unlike his brother gemsbok, he will most likely be found near a water source. When hunting roan antelope, do not be under-gunned; the roan is a heavy, tough, aggressive, and therefore potentially dangerous quarry. Look for his spoor around the water holes and catch him at first light while he is feeding in the open.

The herd bulls can be quite cocky and not all that hard to approach. Be very cautious and at the ready; he may be just so bold as to take you on in a charge. Absolute legal minimum would be the .270 Win with the 30 calibers and heavy for caliber bullets a much better choice. Your best bet for hunting roan antelope is a good .338 magnum, the 9.3mm or the trusty .375 H&H. The high heart/lung shot will do nicely for the side-on presentation; straight up the front leg one-third into the body and squeeze. Aim through the center of the neck where it joins the body if you seek the neck/spinal shot. For a full frontal shot, place the bullet dead in the center of the chest. Once again, be cautious when hunting the roan antelope, as this big fellow can be extremely dangerous.

Countries in Africa where roan antelope can be hunted