The nyala is one of the most beautiful antelope that can be hunted on safari in South Africa. 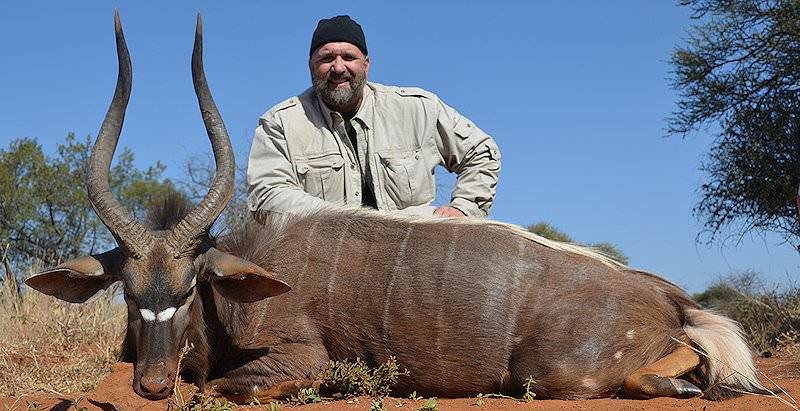 This elegant, slender member of the spiral horned tribe is native to Zululand. His name translates in the Zulu language to “shifty one”, descriptive of his elusive nature. An interesting note here: the nyala marks the dividing line between the large and smaller species of antelope. While the sexes are distinguished as bulls and cows for the larger species and the smaller varieties use the terms ram and ewe, the Nyala male is referred to as a bull while the female is called a ewe. Closely related to the bushbuck, the nyala bull is significantly larger and has a characteristic white chevron between the eyes, a white mane, yellow socks and hanging body hair. The female is a very prominent orange-brown color with white strips on the flanks.

Only the males carry the lyre-shaped spiral horns, which are often set off with ivory tips. The nyala frequents the thickets of the dense woodlands where cover is good and ventures onto the plains only when the grass sprouts. Water dependent, the nyala drinks daily. This majestic antelope forms temporary herds of various structures, i.e. family herds, female herds, bachelor herds etc. They tend to graze during the cool hours and even at night, resting during the heat of the day. Hunting nyala associates closely with the techniques used for the kudu. Ambush him on the approaches to feeding areas and water holes. If tracked and pushed hard, like most he will become curious and stop to look back at his pursuer - usually a fatal mistake.

Hunting nyala calls for quality expanding bullets. Rifles of less that .270 cannot be recommended; the .270 with a heavy for caliber bullet and good shot placement will certainly get the job done. The various 30 calibers, would be an even better choice to anchor your nyala. Shot placement, as always, is critical; straight up the fore-leg about one third into the body - and never above the one half mark - will secure the high heart/lung shot which has proved to be so effective. A word of caution here; because of the “shifty one's” hanging body hair, that 'one third' can be hard to judge, so do not aim too low. If you are to err, err on the high side when hunting nyala. The nyala makes a most attractive trophy - his elusive nature make him a real challenge to ultimately hang in your trophy room.

Countries in Africa where nyala can be hunted