The rare Livingstone eland can only be hunted in a handful of areas in Southern Africa. 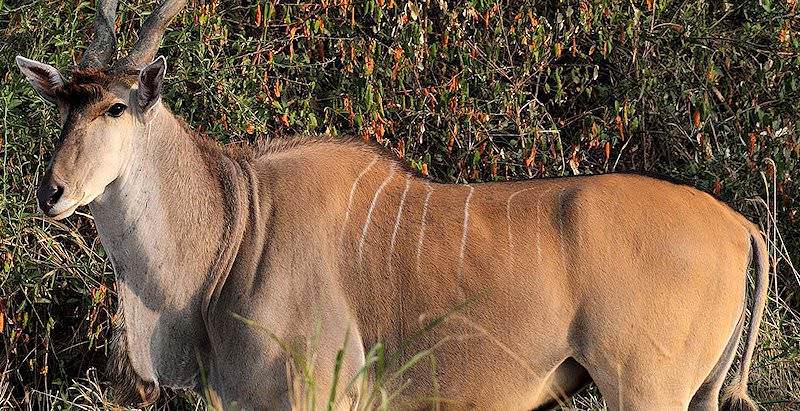 The Livingstone eland is indigenous to Angola, the northwestern tip of Namibia, the Caprivi Strip, northern Botswana, Zimbabwe, and Mozambique. Subsequently transplanted into South Africa, and somewhat bigger, he can often be found right alongside his indigenous cousin the Cape eland. The Livingstone variety has large, massive and impressive horns. White body stripes are evident but may not be as well-defined on mature bulls.

Despite his size, the eland is a sociable herd animal with a gentle disposition. Still, hunting the eland can be a demanding affair, as he is neither territorial nor does he exhibit 'home range' instincts. His daily wanderings can cover great distances in search of suitable feeding areas. Man-made obstructions are of little consequence to him, as this impressive jumper can easily clear a 10 foot obstacle with some to spare.

Both sexes carry spiral horns - however, the bull's horns are considerably thicker at the bases and much more massive. The easiest way to hunt eland is by chance while out stalking other game species. If eland is your chosen quarry, the hunt can take on all the characteristics of the toughest antelope or trophy buffalo hunt you have ever experienced. Look for spoor, get on the track and try to catch up with him while he is still on the move.

This largest of all antelope is neither tough nor tenacious. He can be taken relatively easily with a well-placed shot from a 7mm or 30 caliber rifle, which is precisely what many of the "meat hunters" use. That said, for the trophy hunter, a .338, 9.3mm or .375 might be the best choice. Always use good quality controlled expansion bullets preferably 220 grains or heavier. Place your shot directly on the shoulder - follow the line of the foreleg up into the body not to exceed half way. Always be ready for a back-up shot.

Hunting the Livingstone eland in South Africa can be an exciting and rewarding experience. The reward: a splendid and very unique trophy to grace the walls of your trophy room.

Countries in Africa where livingstone eland can be hunted