The giraffe, the world's tallest land mammal, can also be hunted on safari in South Africa. 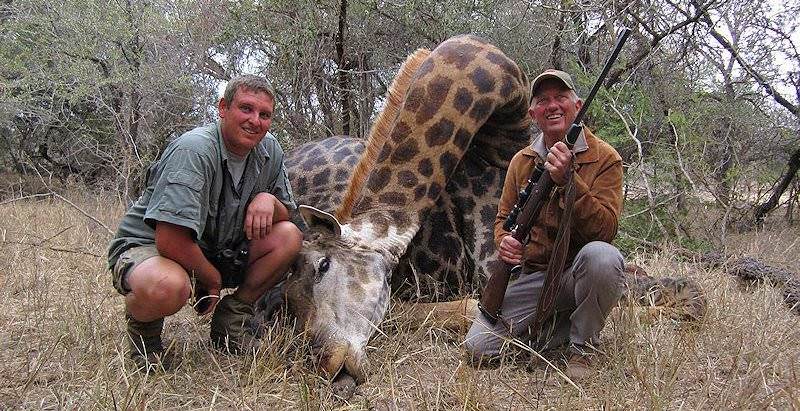 The giraffe is the largest ruminant and the tallest mammal on the planet. This tall 'drink of water' can top out at nearly 18 feet in the largest of males. Horns are of solid bone and carried by both cows and bulls; they are skin-covered, tufted and thin on the female and thick and bald on top for the male. This stately beast inhabits a variety of plant habitats, from the dry woodlands to the fairly dense low shrubveld. Always present will be the thorn trees on which he feeds throughout the year. The giraffe is neither water dependent nor territorial and tends to avoid the very dense bush. He feeds on a 6-foot band of browse, not accessible to all other animals except the elephant. Browsing mainly during the day, they never lie flat on the ground and rarely sleep.

These gentle giants are docile by nature, but will defend themselves if attacked using their front feet. Man and lion are their only real predators and, due to sheer size, the lion risks being kicked to death if he chooses to attack. When hunting giraffe, the approach can be very difficult due the terrain in which they are found. This animal has exceptionally keen eyesight, acute hearing, and a very cautious disposition - all of this, combined with his height, definitely give the advantage to him and not the hunter.

Hunting giraffe will most often be done by spot and stalk or tracking his very distinctive spoor. The giraffe has thick, tough skin and will require the same bullet selection as the elephant. While the faster 7mm’s are legal, the 9.3mm and .375 H&H with good quality solids are the best medicine for any body shot. The 40 calibers will be even more effective, with good quality soft-points being more effective for the brain or spinal shot. Shot placement can be tricky when hunting giraffe; the heart lies in the center of the chest, far forward and above the shoulder joints.

His lungs are positioned well forward and high in the chest cavity as well. The brain is very small and positioned just below and between the horns. If you choose to make a spine shot, place it in the center of the neck where the neck joins the body. A quartering frontal shot should be aimed to break the prominent shoulder joint; avoid the quartering-away shot, take it only as a last resort! Hunting giraffe can make for an extremely interesting and exciting stalk; even though he is not recorded anywhere in the record books, this tall, camel-like beast with the spots of the leopard can make for a most unusual trophy.

Countries in Africa where giraffe can be hunted

Hunting Packages that include a giraffe