The common reedbuck is often hunted in marshy areas in the eastern parts of South Africa. 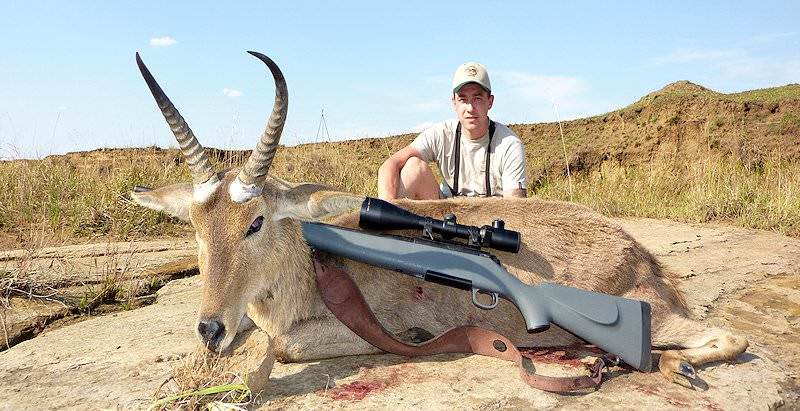 The common or southern reedbuck is a medium-sized antelope generally found near water and especially on the floodplains. He is distinguished by a long neck and body, sturdy legs, and powerful hindquarters. Only the rams carry horns, which are generally short, heavily ridged, and curved forward. Color varies from yellowish to grey-brown. The throat and chest tend toward a grayish white and the belly will be almost pure white.

Sometimes easily confused with the impala or mountain reedbuck, the reedbuck lacks the three black stripes found on the hindquarters of the impala and the impala is much redder in color. The mountain reedbuck is much smaller in stature and a bit more gray in color. To be sure, his habitat is quite different, for as his name implies, he is found predominantly on the mountainsides. Hunt common reedbuck near the water as they are water dependent and always found where water is abundant. They will usually present themselves in pairs, but may be found in larger herds, especially during the winter months.

They graze during the cooler parts of the day and often at night. During the heat of the day they tend to lay-up in the reed beds or tall grass. When “spooked”, they tend to run with a rocking horse movement, tail held high showing its white underside. Your favorite deer rifle will be adequate medicine for hunting reedbuck. The 7mm or .270 is more than adequate. As with all African hunting, be sure to use quality bullets. Aim point will be straight up the foreleg about one third into the body. This will effect the high heart shot and your reedbuck should not go far.

Countries in Africa where common reedbuck can be hunted