Dusk and the dark hours of the night are the best times to hunt the nocturnal bush pig. 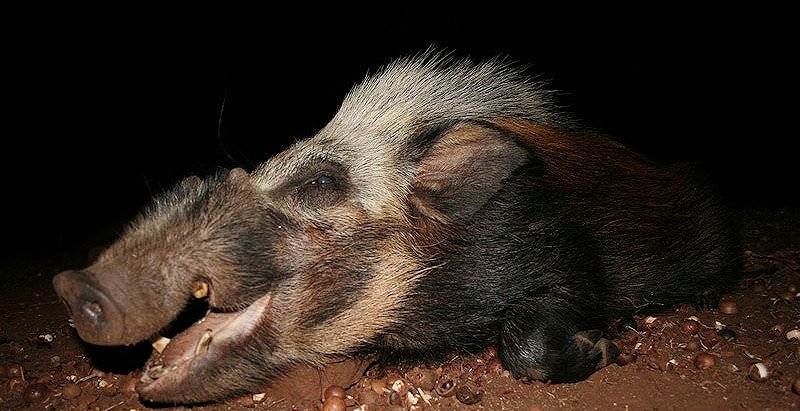 The bush pig is the African equivalent of the European wild boar. He also bears similarities to the feral hogs common in many areas of the US. While he tends to be somewhat smaller than both his European or North American counterparts, he shares the same nasty disposition and aggressive behavior common to most wild members of the swine family. The bush pig is an extremely hairy animal which resembles the domestic hog. His color varies from grey-brown to dark brown which becomes even darker as he ages.

His sharp tusks are relatively short when compared to his cousin, the warthog, and he lacks the facial warts. In addition, his snout is much more narrow and his ears more pointed. Males tend to be slightly larger than females and they reside in groups of 6 to 12 with a dominant male and female and several other females and juveniles.

Hunting bush pig will take you to the thickets and dense underbrush, where they lay-up during the daylight hours. They are most likely best hunted during the night when they are most active. A rifle of suitable caliber should be used, most likely of .270 caliber or better. A shotgun with slugs would be effective as well. Treat these guys with respect; small groups with young can be counted upon to show aggression. Hunting bush pig can make for an exciting evening and an interesting stalk, but use caution, as this ill-tempered beast can be extremely dangerous when wounded.

Countries in Africa where Bushpig can be hunted