The tsessebe is one of the fastest antelope that can be hunted in South Africa. 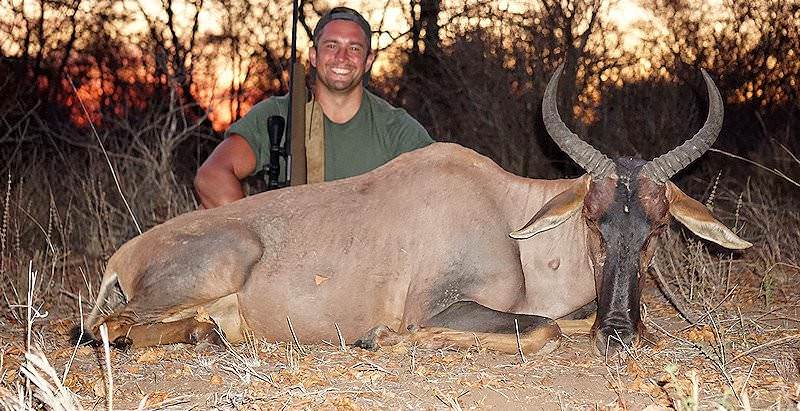 It is only fitting that this very strange looking antelope be saddled with such a strange sounding name. The name is derived from the Tswana name, “tshesebe”. The tsessebe is larger and somewhat different in appearance than the other two animals of the genus (blesbok and bontebok). Both sexes carry horns which are more splayed, and a black (rather than a white) blaze marks the face. Darkish brown in color, there is a characteristic shoulder hump. While they appear to be ungainly, they are very fleet of foot and can run at speed for some distance. The tsessebe is reputed to be the fastest of all African antelope. Highly territorial, he will stand on an anthill with head raised threatening all rivals and will fight on his knees with sweeping horns. Both sexes engage in horning the ground from a kneeling position - another territorial gesture.

A notably social animal, the tsessebe will form large herds and associate with zebra, wildebeest and sometimes even ostriches. Unlike his cousin the bontebok, the herd cows will remain permanently with the territorial bull, even after he becomes infertile. When hunting the tsessebe, take advantage of this inquisitive nature. When spooked, he will run a short distance, stop and look back, even if serious danger has threatened. As we are fond of saying: there is his mistake, and there is your shot. The Tsessebe's natural enemies include the large predators; the lion, leopard, wild dog and spotted hyena. Stalk at first light when hunting tsessebe, or ambush the herd as he approaches his shady resting areas. Because he prefers the plains, a flat shooting rifle may well be required.

The .270 Win and a good expanding 130-grain bullet should be considered the minimum. Rather look to the 7mm's or the 30 calibers with up to 180-grain bullets for a better result when hunting tsessebe. Do not be fooled by the hump - it may cause you to shoot too high. With a side-on presentation, the high heart-lung shot is the recommended medicine; up the front leg about one third into the body. Do not place your shot any higher than the midline. If you take a shoulder shot, place it a bit further up and farther forward than you would the standard high heart shot. The neck is a bit too slender to recommend the neck/spinal shot; if while hunting tsessebe, he offers the frontal shot, take care and place your shot in the center of the chest between the shoulder joints; wait until he lifts or turns his head.

Countries in Africa where tsessebe can be hunted