The little red duiker is found in large numbers in the eastern parts of South Africa. 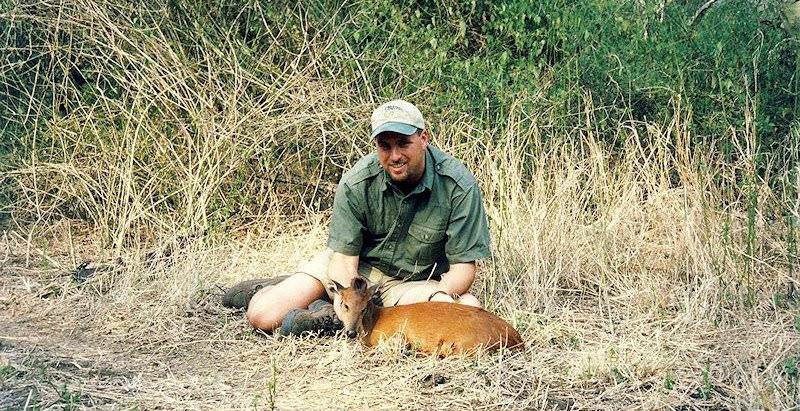 The red duiker is a bit smaller than the common or grey duiker, but somewhat larger than the blue duiker. The most distinguishing feature is his chestnut-red coloring. This mini-antelope is characterized by the crest of red and black hair on the top of the head, sometimes almost appearing to be a third horn. Both males and females carry a pair of short, straight, horns. The ewe's horns tend to be a bit shorter. Look for the outside edges of the ears to be fringed with black hair.

These little guys tend to be solitary, but may on occasion form loose associations. Shy and secretive, they are extremely hard to spot and therefore seldom seen. Like most of the duiker clan, the 'red' prefers dense forest, brushy mountain slopes, and even the thick coastal bush. When encountered and alerted, they will almost surely bound away, giving only a fleeting glimpse of red. The red duiker is almost an exclusive browser, but grazes on occasion, especially when new grass sprouts out of burned out areas.

They are known to eat the fallen fruit of the forest fig, which has been knocked down by the birds and primates. Dependent on water, the red duiker must drink daily. Hunting red duiker can be a real challenge because of his size and shyness, not to mention his preferred habitat; only fleeting glimpses will be afforded to the hunter. While any rifle would certainly be adequate, a shotgun would probably be the better weapon of choice. Shoot straight and fast; good luck!

Countries in Africa where red duiker can be hunted