The ostrich is the world's largest bird. They can be hunted in a variety of areas across South Africa. 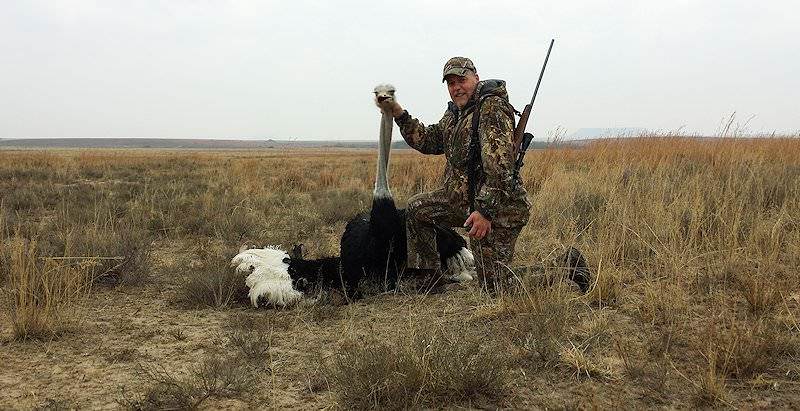 The ostrich is the planet's largest living bird. He is flightless and characterized by soft, drooping feathers. Found widespread over much of southern Africa, he has only two toes, a very long neck and very long legs. His neck and head are covered with fine bristles, while his legs are bare. Males are black in color, accented with white on the wings and tail. The female is predominantly grey. Eggs are laid on the ground and parental care is the duty of both sexes. Because of his black color, the male takes his turn at night.

This “Big Bird” inhabits the bushveld, as well as the more arid desert areas, and occurs in flocks of 30 to 40 individuals when not breeding. Very large concentrations have been sighted at water holes in the desert regions. Males perform elaborate courtship 'dances' when breeding. The ostrich tends to dine on grass, berries and seeds, newly sprouted plants, small reptiles and insects. Hunting ostrich is pursued largely for the hide and meat. The hide of the ostrich is widely used as an exotic leather, very popular in western boots and belts. The meat of the ostrich is taken mostly from the upper legs and the neck and is considered extremely delicious by some. When hunting ostrich, you need not be concerned with caliber or bullet selection. In fact a good many are taken while in pursuit of other game and you will most likely use the rifle you happen to have in your hands.

The trophy is often a shoulder mount, with wings spread. The back skin, if you can call it that, can be tanned and made into a number of very attractive leather goods. Most often the male is sought as a trophy, being a bit more colorful than the female. Aim point when hunting ostrich is dead center on the body; he is soft and if he does not drop to the shot, he should not go far. A great conversation piece and addition to your trophy room, try hunting ostrich if the opportunity presents itself.

Countries in Africa where ostrich can be hunted