A grey rhebuck hunt is one of the most challenging plains game hunts on offer in South Africa. 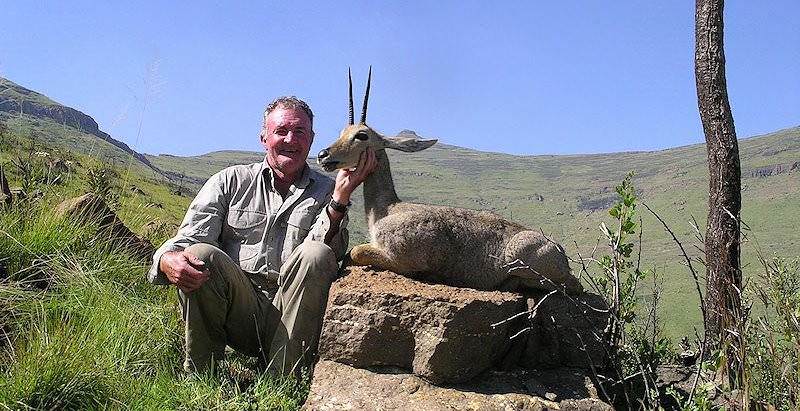 The name 'rhebok' is thought to originate from the early settlers seeing the likeness between this unusual antelope and the roebuck or European roe deer. The name evolved over time to its present spelling. The grey rhebok is a medium-sized antelope, grey-brown in color with thick, woolly hair. His belly and the under surface of his tail are white, which flag prominently as they make off in their characteristic rocking horse motion. They are accomplished jumpers, able to gracefully clear quite high obstacles.

Only the males carry horns, which are upright and pointed. This distinguishes them from the reedbuck. They tend to herd in family groups of up to about 12 animals, consisting of a male, females, and young. Solitary males tend to be territorial. The rhebok tends to graze any time of day with short rest periods, but almost always lays up during the heat of midday. The herd is always alert, and will make a hasty retreat at the slightest sign of danger. Natural enemies of the rhebok are the leopard, caracal and, for the young, the jackal, baboon, and eagle as well.

Hunting the grey rhebok is accomplished with the same methods applied to most all medium-sized antelope. Your favorite whitetail deer rifle is totally adequate. The use of a quality expanding bullet is usually recommended. Based on his grazing patterns, early morning and late afternoon can be considered the best time for hunting rhebok. As with the other medium-sized antelope, take aim straight up the foreleg, about one-third into the body, and never above the halfway point. This should effect the high heart-lung shot and your rhebok should not go far.

Countries in Africa where grey rhebok can be hunted