The fallow deer is one of the exotic animals that can be hunted on safari in South Africa. 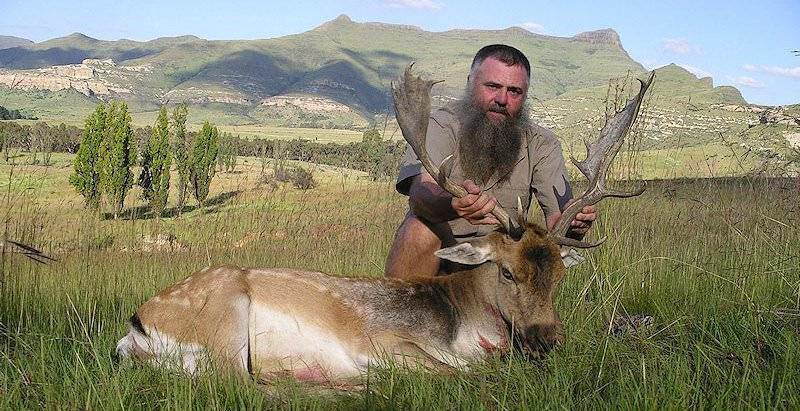 The fallow deer is a non-indigenous specie imported from Europe during the early colonization of South Africa. A ruminant mammal and exclusive grazer, the fallow deer adapts readily to most habitats. He can be found in the the wooded areas of the bushveld to the open plains and mountain ranges. The fallow deer's coat is bright fawn in color and spotted white during the summer months with a white belly. Both black and white individuals are common. Only the males carry antlers, which are palmated above the main beams with a number of points evident along the rear edges. The stag sheds his antlers annually during early spring and the new antler growth is usually complete by October or November. The rut occurs during March and April and once mating is complete the stags leave the herd and form bachelor herds. Gestation is 210 days.

Hunt the fallow deer much as you would the white tail of North America. He is most active during early morning and late afternoon hours. Set up along game trails or near food plots and pastures where he is likely to be found grazing. Your favorite deer rifle will be more that adequate in the taking of fallow deer. Calibers from .270 to the 30 caliber magnums are excellent medicine for the taking of this magnificent beast. Use quality soft nose expanding bullets and place your shot directly on the shoulder. Take a line directly up the front leg about one third into the body and squeeze. Never shoot above the half way point. This shot should penetrate heart and lungs and your deer will not go far.

Countries in Africa where fallow deer can be hunted