Caracals are lynx-like medium-sized cats that are normally hunted with hounds in South Africa. 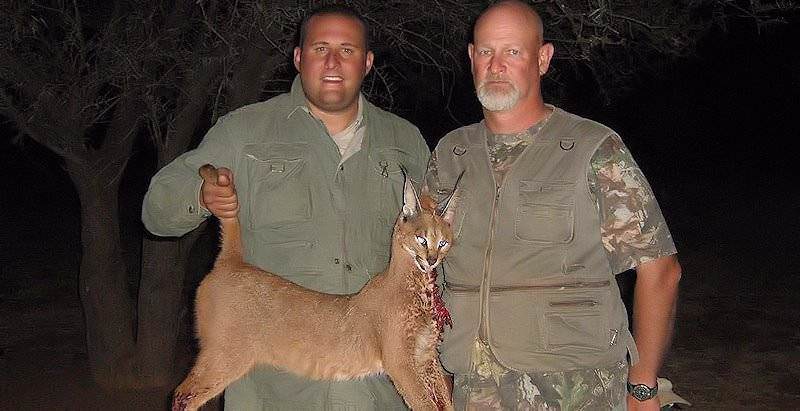 The caracal, or 'rooikat' (red cat) as he is known in Afrikaans, is a relatively small lynx-like creature a bit like North America's bobcat. He is stockier than his close cousin the serval and his fur varies from light red to a rather dark brick red. He is characterized by a rather short tail and prominent, distinct tufts on the ends of his ears. Males and females are relatively the same size. Primarily a nocturnal creature, he can sometimes be spotted during daylight hours on cool days. The rooikat preys mainly on birds, small mammals and reptiles, but has also been known to take medium-sized antelope such as the duiker or steenbok.

Hunting the caracal is more often than not a chance encounter. A spotlight at night over bait can sometimes be effective. You will probably have to shoot from a blind and be extremely still and quiet. Predator calls can also be employed and can be an effective method to getting this wary feline to show himself. While not legal everywhere, the caracal can be hunted with dogs in the Eastern Cape.

Just about any small caliber centerfire rifle is adequate for the taking of this little cat. The .222 or .223 Remington are excellent medicine for this guy. Even the 22 Hornet would do nicely. Be careful of the larger calibers with expanding bullets if you want to save the pelt. Shot placement is similar to that employed on the big cats; place your shot just behind the shoulder a bit below the midpoint of the body. He will not go far. For a great night excursion into the bush, try hunting the caracal.

Countries in Africa where caracal can be hunted

Hunting Packages that include a caracal

One of our most unique hunting packages, the Eastern Cape hunt includes rarer trophy animals like Cape kudu, mountain reedbuck and the shy caracal, which is hunted with dogs. The area hunted in is verdant and mountainous.