When embarking on a blue duiker hunt, you will be pursuing South Africa's smallest antelope. 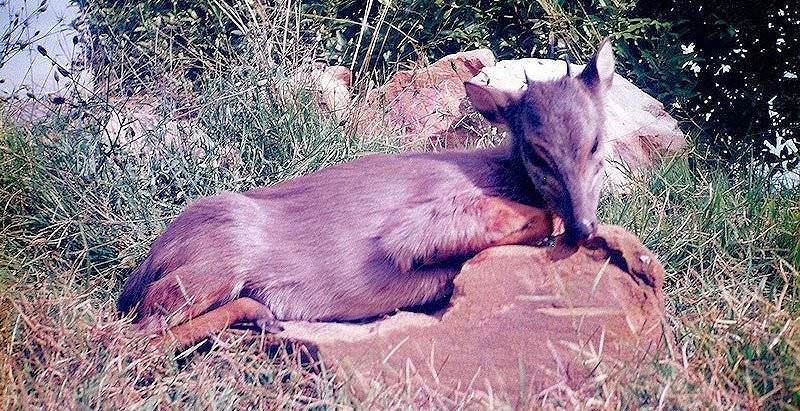 Want a real challenge? Try hunting blue duiker! The blue duiker is the smallest of the duiker species and one of Africa’s smallest antelope species. A member of the duiker family of bovids, he weighs in at only 10 to 12 pounds. He sports a poorly developed crest of hair between his 2-inch horns, which are often absent in the female (ewe). His hair is a blue-gray with a white belly and a short tail with a white underside. His muzzle is a bit trunk-like and the eyes are placed a bit more forward than those of other small antelope.

Hunting blue duiker can be a difficult endeavor, as this little guy is usually solitary, secretive, silent, and extremely difficult to spot. If caught or startled, they will be heard to make a loud cat-like meow. They confine most of their movements to the dense forest and thicketed worn paths between their lying-up, feeding, and drinking places. Being shy and timid, they bolt for cover at the slightest threat of danger.

Hunting blue duiker is most likely best done using a shotgun. While any caliber rifle would certainly be adequate, the hunter can only expect to get a fleeting glance of this tiny antelope, which would make a rifle shot extremely difficult. Classic shot placement of course would be on or just behind the shoulder, however, when hunting blue duiker, one may have to settle for a hit wherever it can be made.

Countries in Africa where Blue duiker can be hunted