Tales of the legendary professional hunters who left behind a legacy we can aspire to.

The Professional Hunter (PH) is a title bestowed on the men and women who guide and organize hunting expeditions all over the world today. Its tradition can be traced back almost a century to R. J. Cunningham; Theodore Roosevelt's Professional Hunter on his famous safari of 1909-1910. The tradition is continued today by countless men and women who guide visiting sportsmen on hunting safaris throughout the world, but especially in Africa. This is not a title which is easily earned. In most African countries today, Professional Hunters are licensed by the game department and undergo extensive training and testing. The PH assumes complete responsibility for the safari, which includes the safety of the clients and crew. He must also be able to organize a camp, fix a broken vehicle, judge the horns of an antelope at more than 300 yards, be familiar with all manner of firearms, and stop a charging buffalo at close quarters if necessary. The names which might come to mind might make for a long list, and to try and determine which might be the best would surely be cause for argument while sitting around the “bush TV” (campfire); but here a few of the “greats”: 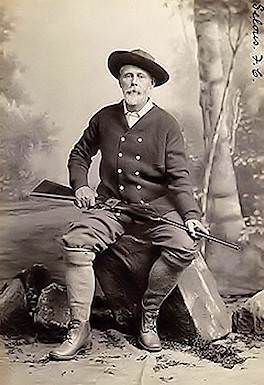 Frederick Courtney Selous was born in London, England on 31 December 1851. He was a British Army Officer, explorer, hunter, and conservationist, famous for his exploits in southern and east Africa. He was one of five children born to an aristocratic family of third generation French-Huguenot heritage. His real-life exploits inspired Sir H. Rider Haggard's fictional character, Allan Quartermain, of "King Solomon's Mines" fame. He was a good friend to Theodore Roosevelt as well as Cecil Rhodes. At age 42 he married the 20-year-old Marie Catherine Gladys Maddy, the daughter of a clergyman, and had two sons, Bruce and Harold. It is a little known fact that Selous also had children by at least three African wives. He married a Ndebele woman from Southern Rhodesia and had a daughter, Magdalen, born in 1874; a Tswana woman (from today's Botswana) gave him a son, John, in 1900; and a woman of the Manyika tribe from eastern Zimbabwe gave him another son, Frederick. Although he never publicly acknowledged his half-caste children, he paid for their educations and left them a considerable amount of property in Bulawayo and Salisbury (now Harare).

From an early age, Frederick was influenced by the stories of the adventurers and explorers of the time and was drawn to the study of natural history. He was educated in England, Germany, and Austria and, although pushed by his parents to study medicine, his love for the natural sciences led him to study the ways of the wild animals and their natural habitats. His natural curiosity and vivid imagination was only further fueled by the exploits of Dr David Livingstone; no one at the time could predict that he would later become a similar, if not a greater, hunter, explorer and legendary character in his own right.

While his exploits as a soldier and explorer are far too extensive to recount here, he is probably best remembered as one of the world's most revered big game hunters. His safaris in Africa are well-documented, but he in fact pursued his passion for hunting all over the world. His exploits are filled with accounts of trespassing, poaching, and brawling all over eastern and southern Africa. He left England in 1871 at the age of 19 years with only 400 English pounds in his pocket, bound for Africa. His goal was to earn a living as a professional elephant hunter and, by age 25, he was known all over Southern Africa as one of the most successful ivory hunters of the day. Selous the naturalist collected and cataloged virtually every species of African mammal species. While he did not lead Roosevelt's hunting expedition of 1909, he was a member and largely responsible for organizing the logistics of that famous safari. In 1907 he founded “The Shikar Club”, a big game hunter's association that could probably be considered the first “Safari Club” and Professional Hunter's Association.

An experienced rifleman and expert in firearms, he preferred the 4 bore for elephant hunting, taking some 78 of the big beasts between 1874 and 1876. He used the 10 bore for lion and took too many of the big cats to count. With the advent of smokeless powder and metallic cartridges, he counted on the .256 Mannilicher for small and medium game while the .450 Nitro Express was his medicine for dangerous game. His favorite gun makers were Gibbs of Bristol and Holland & Holland of London. His life ended on 4 January 1917, on the banks of the Rufiji River, during a bush war against German colonials, killed in action with the 25th Royal Fusiliers in what is now the Selous Game Reserve (Tanzania). He is buried there with a simple stone and bronze plaque to mark his grave. Frederick Courtney Selous is truly an icon of the African hunter; his exploits as an explorer, adventurer, naturalist and hunter will be long remembered. 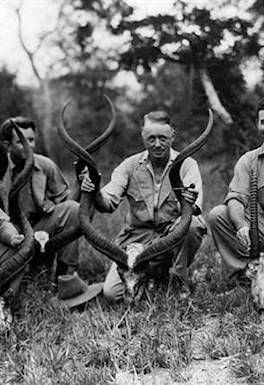 Philip Percival became famous as a result of being in the right place at the right time - not once, but twice. In 1909 at the age of 23, Sir Alfred Pease hosted the Roosevelt safari at his home and organized a lion hunt on the nearby plains. Pease hired the Hill cousins, already famous lion hunters, and the young Percival to conduct the hunt. The Roosevelt safari changed young Percival's life. A quarter century later, and by then a seasoned professional hunter, he guided Ernest Hemingway on his safari and became immortalized in literature as the character “Pop” in Hemingway's novel “The Green Hills of Home”. Hemingway returned to Africa almost 20 years later and again hunted with Percival, the account of which can be found in “True at First Light”.

Traveling to British East Africa in 1906, Philip tried his hand at ostrich farming. Finding that his ostrich were little more than lion bait, he quickly gained experience in the “art” of hunting lion. When not hunting lion to protect his ostrich, he began taking clients out lion hunting for the sum of ten British pounds per week and twenty-five pounds per lion. After the Roosevelt safari, he took on the safari trade in earnest and never looked back. On these early safaris, the sportsmen provided their own food, drink, tents and bedding. Percival was feeling his way through a new profession but, more importantly, he was gaining valuable experience in dealing with dangerous game. After the Roosevelt safari, because of the enormous publicity that it generated, sportsmen from all over the world began showing up in Africa. The advent of the “white hunter” and the safari trade had arrived.

Philip Percival was one of the earliest established professional hunters. Respected by all, he became one of the highest paid hunters of his day. 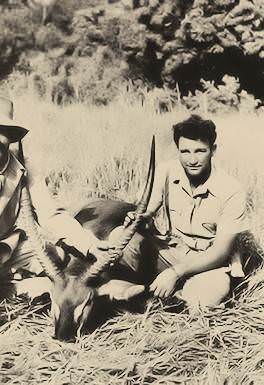 Harry Selby was born in South Africa in 1925. At three years old, his family moved to Kenya and homesteaded 40 thousand acres of ranch land suitable for raising cattle. The family farm was also inhabited by herds of many species of African antelope and seasonal migrations of elephant, buffalo, and other big game. When lions or leopard appeared, a hunt would be initiated to protect the livestock. At the age of 8, Harry was considered old enough to take on the responsibilities of hunting with a single shot .22 rimfire. These early hunts provided the family with guinea fowl, francolin and gazelle chops. Since the farm was not fenced, animals that migrated onto the property and competed with the cattle for grazing were often culled. Harry honed his skills during these hunts, sharpening his shooting skills using an old worn .303 British military rifle with iron sights. Harry learned about dangerous game by learning to avoid them while hunting smaller game. When Harry started hunting the dangerous species, he took advantage of experienced native trackers who imparted their knowledge and wisdom of the bush to the young hunter. Harry soaked up this wisdom like a sponge, and these trackers came to respect Harry because they knew that when he pulled the trigger, it meant fresh meat in camp.

In his late teens, Harry went on his first elephant hunt, teaming up with a cousin who, like himself, was a keen hunter. They each bought an elephant license and departed for Kenya's Northern Frontier District. Harry bought a Westley Richards .425 caliber rifle and his cousin carried a .450 double rifle. With several of the family's native farm hands, the two hired a local tracker and set out on foot to hunt elephant. Tracking a small herd, they finally closed on them and found three bulls with very large tusks. Singling one out, the two young hunters both fired at the same bull, bringing him down easily. The spectacular elephant that they downed had ivory to the tune of 135 pounds per side; a number that is unheard of in Africa today. Well into the 1960's, Harry returned to that same area and guided clients to many hundred pound tuskers, considered by any standards to be the “Holy Grail” of African elephant hunting.

Harry joined Ker & Downey Safaris in 1949, which eventually became Ker, Downey, & Selby Safaris in Botswana. In 1951, Selby took Robert Ruark and his wife on safari in Tanganyika (now Tanzania), which resulted in Ruark's book “Horn of the Hunter”, one of the most widely read books ever written about African hunting and safari life. This book put Harry on the map, creating a demand to hunt with Selby so great that bookings had to be made three to four years in advance. Ruark's subsequent trips to Africa netted another book entitled “Something of Value”, which is a fictional novel whose principal character is based on Harry's persona and life experiences. Ruark continued to hunt with Selby throughout the 1950's, sometimes returning two to three times a year. In 1962, with the future of hunting in Kenya uncertain, Harry moved to a little-known country called Bechuanaland (current day Botswana), again joining Ker & Downey. Negotiating with the government and securing a concession of nearly 10 000 square miles along the northern edge of the Okavango Delta, Harry and his partners took up the safari trade in Botswana.

In 1970, Harry and his partners expanded KDS to include photo tours, built a 30-bed lodge and two 10-bed tented camps. By the end of the 70's, the operation included more than 90,000 square miles of concessions and a roster of professional hunters totaling more than 20. The 1980's saw the eventual breakup of the large safari companies and today the large concessions have been divided among a variety of photo and safari outfitters.

Harry Selby is truly an icon among professional hunters. While his professional hunting days are over, he still enjoys his time in the bush, walking among the big game, sleeping in tented camps, and just enjoying the events of each day he spends in the field. Harry's exploits will be the topic of conversation around bush campfires as long as the big game still roams the plains and bush of the 'dark continent'.