Hunters who pursue the mighty lion in South Africa are in for a once in a lifetime experience. 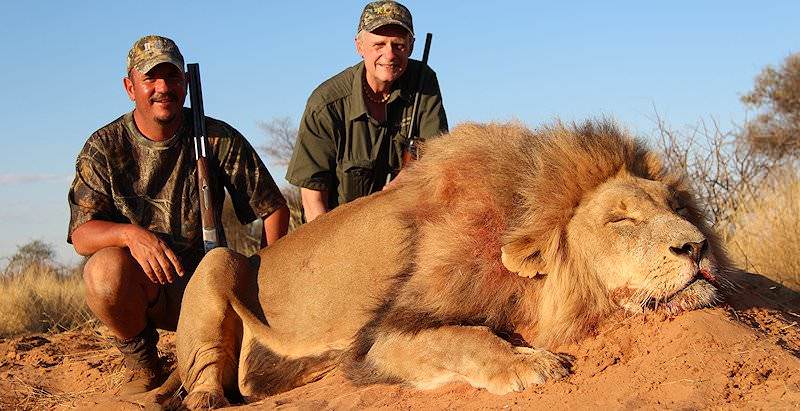 The African lion may not live up to his erroneous reputation as 'King of the Jungle', but he is without question the King of all African predators! While in many circles, the buffalo is considered the most dangerous of African game, the lion is probably the best known, most respected, and feared member of the Big Five. He is the largest of the African cats, weighing in at between 400 and 500 pounds. He stands nearly 4 feet at the shoulder and measures about 10 feet from muzzle to tail.

The lioness is somewhat smaller in stature, but what she lacks in size she makes up for in 'mean'. The lioness is often much more aggressive than the male of the specie, and she does most of the hunting. A lioness with cubs can be extremely dangerous. Mature lions exhibit little fear of man, and can be especially bold during the hours of darkness. They have exceptional night vision and possess very large talon-like retractable claws, which they use to hold prey while biting down on the throat to suffocate their quarry. These large felines prey on virtually all of Africa's species.

The lion is the only member of the cat family to live in social groups, called 'prides'+. The pride consists of a matriarch, several of her sisters, their cubs, and a dominant male. These large cats have very large appetites and can consume up to 25 percent of their own body weight in a single feeding. Only the males have manes, which develop between 2 to 3 years of age. Some males remain maneless, but their size and muscle structure distinguish them from the females.

Both the lion and lioness can make for extremely exciting hunts. This member of the Big Five deserves your utmost respect. He is extremely nimble and fast, able to cover 100 yards in 3 to 4 seconds. Unpredictable as a house cat and extremely vindictive, he will finish what he starts and is well-equipped to make short work of a man. An ambush predator, if he is hurt and he knows what has hurt him, he will be intent on doing something about it!

Hunt 'Leo' with a minimum of .375 caliber, as is the lawful minimum in most African countries. One-shot kills with the .375 cannot always be guaranteed, so you may consider a larger caliber if you shoot it well. First shot placement is all important, as the follow-up on a wounded cat can be extremely exciting if not downright dangerous. A poorly shot lion will lie in wait and is capable of great speed in a charge. When he charges, he will target just one of the party of hunters and will be intent on doing deadly harm. It has been proposed by some that the correct rifle used for the follow-up on a wounded lion is not the same rifle you used for the initial shot. If available, use the largest caliber double rifle that you are comfortable with for this task. The lion in full charge can be an extremely difficult target and only a large caliber rifle can be counted upon to stop this big cat. Listen carefully to the instructions of your Professional Hunter and follow them to the letter. Take your time and proceed cautiously when on the trail of the largest of the African predators.

Countries in Africa where lion can be hunted