Hippos are among the dangerous game animals that can be hunted in South Africa. 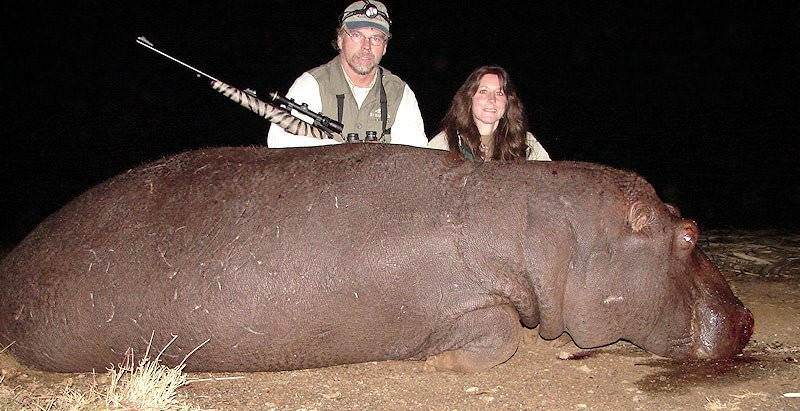 Some of Southern Africa's professional hunters associations have added the hippopotamus to their list of dangerous game, and rightfully so. The hippo can be extremely aggressive when disturbed and accounts for more human deaths on the African continent than all of the other members of the Big Five. The hippo can be found in many of the rivers and pans of Southern Africa. His sun-sensitive skin keeps him in the water nearly all day and is usually only found away from the water during his nocturnal grazing sessions. His encounters with humans normally occur around sunrise while he is making his way back to water and can often result in a fatality.

Hunting hippo can be a very difficult task. Normally the bulls are hunted as trophies and, as they spend most of their time in the water, identifying the bulls can at best be difficult. The bull's head will be slightly larger than the cow's and he will exhibit two not-so-prominent humps on either side of his nose where his large lower tusks fit into his upper jaw. When hunting hippo, by all means use enough rifle, and when hunted in the water, as described, your shot placement must be dead-on. The triangular indentation just above the eyes is your aim point and a shot placed here will penetrate the brain and anchor this large “water horse”. From the side, aim just below the ear. The hippo will sink beneath the water, but float back to the surface within about an hour or so, making his recovery possible. Use extreme caution here, as where you find hippo, you will almost be sure to find the Nile crocodile as well. Sight your rifle in dead-on; your shot must be made with pinpoint accuracy.

The hippo can also be hunted on land and, make no mistake, hunting hippo in this manner can be terrifically exciting. A hippo bull disturbed on the land or in a small pan can become frightfully aggressive. Approach this big fellow with extreme caution and be ready for a charge. Rely only on large caliber rifles with solid bullets for this job. As always, the .375 should be considered as the minimum caliber, but consider one of the 40 calibers or even larger in a double rifle if at all possible. A well-placed shot on the shoulder will anchor one of these big animals if you have used sufficient gun; in a charge, the brain shot will be your only guarantee of stopping the beast.

Countries in Africa where hippopotamus can be hunted