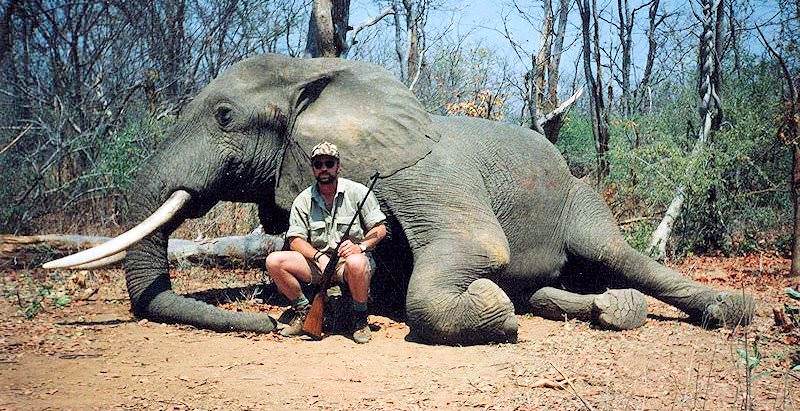 The African elephant is the world's largest land mammal. He stands more than eleven feet at the shoulder and can weigh in at over seven tons. His dark grey skin provides excellent camouflage in the dense brush of the bushveld. He moves through the bush with amazing speed for his size and can be extremely quiet. While his eyesight is relatively poor, his hearing is very good and his sense of smell is without equal. Over his lifetime, he receives 6 sets of molars, which move forward in his jaw as previous sets wear down. His last set of teeth comes in at about 47 years of age and once these wear out he can only look forward to slow starvation. Thus, depending on his diet, his lifespan is somewhere between 50 and 70 years.

He is a destructive feeder, preferring grass and, rather than adapting to his habitat, he adapts his habitat to suit his purpose. He can consume up to 500 pounds of grass and browse every day. The elephant is a very social animal found in herds made up of cows, calves, and adolescents. Bulls are usually found on their own or in small bachelor herds and only occasionally with a herd of cows. Tuskless cows and cows with calves by their sides can be extremely aggressive. You hunt this animal with your legs; the stalk can be quite long and cover many miles.

While the .375 is the legal minimum caliber, there will be no room for error in your shot placement if it is your weapon of choice. Hunt this 'big fellow' with the largest rifle you can shoot well. 40 and even 50 caliber rifles with 400 to 500 grain solid bullets would definitely be a good choice. A fifty-yard shot might be considered a long shot on the elephant, as most are taken at between 20 and 30 yards. Contrary to the opinion of some, the elephant is not endangered and in fact several countries of Southern Africa have been forced to institute culling operations to keep their numbers in balance.

Countries in Africa where elephant can be hunted