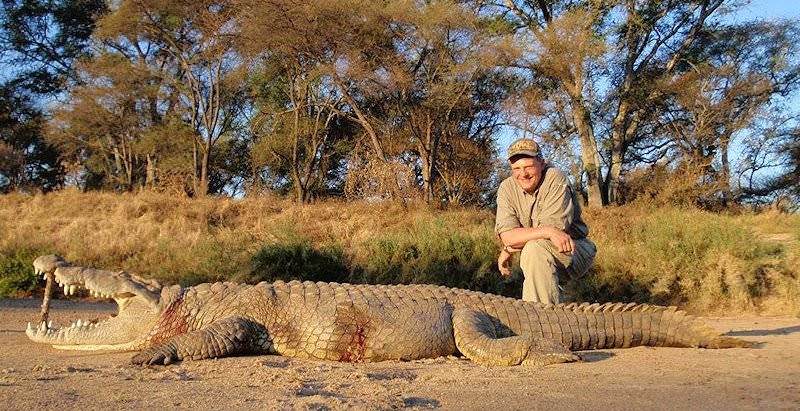 The Nile crocodile is one of Africa's most unusual trophies. These large, predatory reptiles are found in almost all of the large rivers of Africa and can be extremely dangerous to those who venture near the riverbanks. The croc is a long-living, slow-growing specie reminiscent of prehistoric times. Hatchlings are about a foot long and grow rapidly during their initial stages of life. During their first six years they grow at a rate of about 10 inches per year, after which that rate slows significantly. The trophy crocodile may reach a length of about 15 feet and may be as old as 75 to 100 years of age.

While the croc appears to be lazy and lethargic as he basks on the riverbank, do not be fooled; he is a shy, wary, and extremely cautious creature. They are extremely difficult to approach on foot to within a reasonable shooting distance. This 'big lizard' is extremely hard to kill quickly and cleanly. The first shot on the croc must be carefully placed to anchor him, as if he is allowed to retreat to the water, the trophy is surely lost. Only two shots are effective in anchoring your croc; a shot placed into his golf-ball sized brain or one that hits the spinal column just behind the head.

The croc is best hunted from a blind and shot from a solid rest in the prone position. His tough hide and the extremely hard bone encasing the brain calls for a rifle of at least .338 caliber or larger. Use only quality controlled expansion soft point bullets. Rifles larger than .375 caliber should be avoided, as the recoil from such a weapon shooting from the prone position can be brutal, and thus accurate shot placement becomes an issue. Without question, a quality scope of a least 4-power is essential.

Hunting the trophy crocodile can be an exciting and rewarding experience. With a bit of planning, one can stack the odds in your favor. Choose the right rifle and bullet combination and place your shot carefully. Your reward will be a magnificent crocodile to add to your trophy room.

Countries in Africa where crocodile can be hunted